I am so excited to finally be able to share the exciting news that Jennie Suddick and I are preparing an exhibition for the Aga Khan Museum in Toronto. After numerous shifts in planning and concept due to the chaos of the past year, State of Play will be on view this summer! Stay tuned.

I just completed a fantastic 6-week online residency with Bonfire. If you scroll through the latest news, you’ll see that I’ve become a big fan of the virtual residency format. I love the structure and community they provide, especially in this year of long, slow, waiting. They have a few deadlines coming up for future residencies…take a look.

Over the past month, I’ve been attending two online residencies, one with World of Co, based in Bulgaria, and one School of Visual Arts, based in New York. It was a lot to juggle these two programs at the same time, but it was wonderful to feel challenged and busy after a few months of a much slower pace.

Per quanto tempo è per sempre opens today at Officine Giovani in Prato. The exhibition, which takes place in what were once the refrigerated cells of the meat-processing complex, reflects on the concepts of preservation and conservation in relation to the passage of time. Very pleased to be participating in the show with such a great group of artists. Curated by Spela Zidar and Leonardo Moretti.

For the past month I have been participating in an online residency with Proyecto ‘Ace, based in Buenos Aires. Before starting the residency I was uncertain that a virtual format could provide the community, support and structure that I was seeking for my practice, but I quickly realized that absolutely could. The theme of the residency, Together Apart: Shelter, was exactly what I needed. See work from the participants here.

After a long, strange spring, I am so grateful to have been invited to participate in So Close So Good at Numeroventi, in Florence. The exhibition brings together a selection of Florence-based artists to reflect on questions of borders, the local versus the global, and how our respective art practices will move forward from here. Visit the virtual exhibition here, or schedule an in-person viewing by contacting Numeroventi.

December 16, 2019
I am incredibly honored to be featured in the recent issue of Artext, Acts for Art, interviewed by Alessandra Tempesti of Lottozero.

November 16, 2019
Opening on November 16 at 6pm at Fondazione Sensus in Florence. Homo Bulla will be on view along with a selection of photographs and videos through January 31, 2020. Hope to see you there

Read more about the show on exibart.

October 16, 2019
Coming soon! I have a new video installation coming down the line for the show The Money Maker, opening November 8 at the Galleria Civica di Bressanone.  Part of the “Economy goes culture” project in Bressanone, I had the opportunity to work with the historic printing company A. Weger and develop a piece based on the experience.  I have had the pleasure of working on all phases of this project with curator Elisa Barison. Thank you to Lottozero for nominating me for the project.

September 17, 2019
Pleased to be a part of the exhibition Ghosting at LdM Gallery in Florence, curated by Silvia Bellotti and Erica Romano of Associazione Culturale Forme. September 17-October 24. More info here.

Homo Bulla is on view at Casa Atelier – Museion (Bolzano) until October 27, 2019! See photos of the installation and the opening here.  Curated by Alessandra Tempesti of Lottozero.

Very excited to announce an upcoming solo exhibition at Casa Atelier at Museion in Bolzano in September 2019. Many thanks to this year’s curators, Lottozero for inviting me. Read more about Casa Atelier.

February 15, 2019
Work in progress on a new project to debut on June 6 at the Galleria Civica in Bressanone inspired by a collaboration with curator Elisa Barison and the A. Weger printing company. 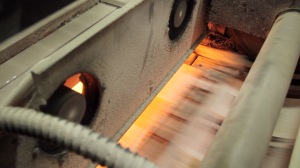 August 5-19, 2018
So happy to be heading to an artist Residency at Spazju Kreattiv in Gozo, Malta with Jennie Suddick.

I am extremely grateful to have received a STEP Travel Grant funded by European Cultural Foundation and Compagnia San Paolo in support of this project.

June 2018
Primavera in Sospeso (2018), Robert McLaughlin Gallery, Oshawa (Canada), in collaboration with Jennie Suddick.  Artists in residence from May 8-June 9, 2018.

Opening on September 12 at the Maidoff Gallery in Florence! More info here.

May 2017
Last month I had the chance to spend a week at Artscape Gibraltar Point on Toronto Island for a mini-residency called SoftWear focused on wearable technologies. So much still to learn, but lots of new ideas in the works.

March 26, 2017
New installation in the works for Ten Spaces at Numeroventi in Florence!

January 19-22
Primavera in Sospeso at Come Up To My Room 2017 at The Gladstone Hotel (Toronto) in collaboration with Jennie Suddick!

INSIDE LOTTOZERO opens tonight! Find out about the  space and the artists in the show here.

September 25, 2016
So excited to be selected as one of the 25 finalists for TU35, a survey of artists under 35 years old in Tuscany presented by Centro per l’Arte Contemporanea Luigi Pecci. Opening in Prato on October 12.

Over the summer I spent a day working at Numeroventi, a brand new artist residency,  event and exhibition space in Florence. Check out a few of the images here.

I am so excited to be included in the inaugural exhibition at Lottozero, a brand new exhibition and workspace focused on the use of textiles in contemporary art. The opening will take place on October 15 here.

But first the exhibition is traveling to   Kunsthalle Eurocenter Lana in Bolzano for the Transart Festival on September 17!

May 13, 2016
I am so incredibly excited to be featured in Juxatpoz Magazine!

March 23, 2016
Looking forward to participating in the OCAD University Visiting Artist and Speaker series in April! 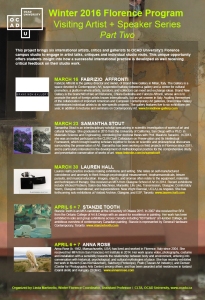 February 4, 2016
See me talk about making art in Florence in this video by LDM News and The Florentine.

Jan 21, 2016
Reliving happy memories from my November Residency at D’CLINC!  The Best of D’CLINIC 2015 exhibition is on now at VMK – Gonczi Gallery in Zalaegerszeg. More info here.

November 13, 2015
Opening November 19 at 6pm. Officina Giovani, Prato.  On view through December 6.So pleased to be included in this show! Find more information here. See photos from the exhibition here.

November 6, 2015
Telling it how it is in this interview for the fantastic blog Girl in Florence.

This month I’ll be working at D’CLINIC in Zalaegerszeg, Hungary.  Keep up with my adventures and see work in progress on Instagram.

See images here from the final exhibition with my two co-residents, Jane Fogarty and Dervla O’Flaherty.  It was a great month in excellent company!  I’ll be posting work soon.

August 14, 2015
Hair Picnic is underway at Das KloHäuschen!  Read more about the show (in German) here.

Very excited to be selected as a finalist for Premio Combat 2015.  The Mediterranean Diet will be on view from June 27th to July 25th at MUSEO CIVICO GIOVANNI FATTORI ex GRANAI di VILLA MIMBELLI and FORTEZZA VECCHIA of Livorno.

May 24, 2015
It’s a busy week coming up!  I’m participating in three events during Florence Design Week with Creative People in Florence.  May 27 – 31.

February 25, 2015
So excited to be sharing the screen with these video artists in conTENporary words of art.  February 27-28, Sala Santa Rita, Rome.

February 20, 2015
I’m so pleased to be included in this show (and in the collection) at Casa Masaccio. Opening tomorrow.

January 26, 2015
I’m looking forward to some great projects this spring and summer!

I’ll be heading back to beautiful Salzburg in April for a show at Periscope curated by Tina Teuful.

In August Janean Williams and I will be installing Hair Picnic in Munich at Das KloHäuschen.  It’s going to get weird…and hairy.

It’s been a beautiful and productive month in Hrisey at Gamli Skoli Old School Arthouse.  We ended our residency with a small show in the local museum.  I’ll be posting new work as soon as I sort through all the images, videos and other odds and ends.  Stay tuned…

I dropped off The Dunes, The Street, and The Shore in Livorno today and picked up the invitations for ContamInAzioni, curated by Francesca D’Aria at the Sala degli Archi of the Fortezza Nuova.  The show opens November 7 and runs through November 22.  You can see the catalogue here.

October 17, 2014
I’ve been selected to particpiate in the 50 SLOV/WORDS Project! Read more about the project here.  What do you think my word is?  Check it out in the catalogue.

Thanks to Sara Amrhein, my partner at Creative People in Florence for featuring me in her Contemporary Florence interview series on her blog, When in Florence. Read it here.

September 7, 2014
Proud to be leaving my mark at SFAI!  Here is The Dunes, featured in the new promotional video for the school.

What an honor to be an Akureyri Grant Recipient and to participate in an upcoming residency at Gamli Skoli Old School Arthouse, Hrisey Iceland, November 2014.  Take me to the Northern Lights!

I just got back from two weeks in Salzburg at the International Summer Academy of Fine Arts.  A gorgeous city and a lot of inspiring people.  Work coming soon.

Starting today Vanity Hair is featured in FRAME/S at the Detroit Center for Contemporary Photography.

Back from San Francisco.  It was great fun working in the unusual space of The Old Mint with Irene Carvajal.  Here are the first images from the show.

It’s been a busy few months!  The Dunes was featured in the Arte Laguna Prize Finalist Exhibition at the Arsenale di Venezia.  In April Bosco-Città was part of the Premio Valcellina Exhibition at Palazzo d’Attimis in Maniago.  Tomorrow I’m off to San Francisco to participate in Principal at the Old Mint.

Check out some images of my hair pieces in a photoshoot for jewelry artist Sara Amrhein.   Fabulous fun and a great team from Creative People in Florence!  Watch the backstage video here.

The Vanity has made the longlist and been awarded an honorable mention for the TFHMF Award! It will be on view at the Supermarket Art Fair in Stockholm, February 14-16.

Finalist for the Arte Laguna Prize!  The Dunes will be on view at the finalists’ exhibition at the Arsenale di Venezia, opening on March 22, 2014

While I’m in Valencia this weekend at Incubarte to see Bosco-Citta’ on display, my work will also be featured in the ProyectorInternational Video Festival in Madrid from November 21-23.

Here is a still from my video Pony (2013) being used in the SFAI advertising campaign for the low-residency MFA program.

Shortlisted for the Art Gemini Prize!  Very excited to participating in a show at Rebecca Hassock Gallery in London in January.

So happy to have been selected for Incubarte 2013!  Looking forward to seeing Bosco-Citta’ projected in Valencia.  November 21-24, 2013.

See me on ArtSlant!  I’m so excited to be a Juried Winner on ArtSlant, and to be featured in VIEWS, as well as on ArtSlant’s Facebook, Twitter, and Tumblr pages this week.

Getting ready for the Murphy and Cadogan Contemporary Art Awards Show at Somarts.  Opening on September 6.  So pleased to be showing alongside so many great artists!

Crosshairs, a collaboration with Janean Williams is now on view at Swell Gallery!  Closing picnic on August 3 at 5pm.

Videos on view at Mayday!

See photos from the event here.

Check out some great photos of my new studio by photographer Birgitte Brøndsted, featured today on her gorgeous blog, A Dusty Olive Green. Thanks Birgitte!